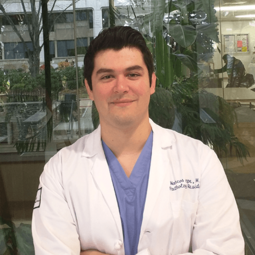 Marco’s nominators praised his pathology images, social media skills, and role as an ambassador for USCAP. He’s currently a pathology resident at Brown University – so we asked him what his varied experiences have taught him.

“During the second month of my cytology rotation, I grew overconfident in my diagnostic abilities. Then I received a couple of trays of unknowns, breezed through them, and proudly turned them over to my mentor – who was less interested in speed and more in how I reached each diagnosis. A faint sense of self-doubt grew in my mind. How could I have missed diagnostic clues that were staring me in the face? I could have spent countless more minutes analyzing the cases, but I had not. I wanted to impress with speed and precision. So I went back with a new perspective: being fast is impressive, but being right is priceless.