Outside the Lab Profession, Microbiology and immunology, Training and education

Working for the Global Good

What sparked your passion for global health?

I had always wanted to work overseas and make an international impact – I just didn’t know how. Then, while working as a medical technician in a microbiology lab, the pathologist told me, “You need to go to medical school.” As good as that sounded, this was in the 1970s, when getting into medical school – especially in California – was extremely competitive (about one in 30 applicants were successful). So I moved to Guadalajara, Mexico, to begin medical training; it was there that my interest in international health took off.

The university had a program called “Medicine in the Community,” in which we’d go into rural communities for six weeks to complete vaccine campaigns and various public health activities. This kind of work combined all of my interests: travel, public health, and infectious disease. When I returned to the US for residency, I also took a keen interest in global health thanks to lectures from Daniel Connor, Head of Infectious Disease at the Armed Forces Institute of Pathology (AFIP). He’d spent a lot of time working with Denis Burkitt in Uganda throughout the 1960s, and that inspired me to work in global infectious disease pathology in Washington, DC.

I was fortunate enough to move to Kinshasa in former Zaire to do the pathology for Project SIDA. Run jointly by the Centers for Disease Control and Prevention, the Tropical Medicine Institute of Antwerp, and the NIH, the program had a huge, cross-disciplinary impact and was the first international AIDS project in Africa. I worked there from 1986 to 1991 and was lucky enough to meet a local doctor who had just finished his Master’s in Public Health. We got married a year later, and we’ve been together ever since! I think that experience and immersion in global health made me more of a hybrid than a laboratory pathologist. It was also fantastic to help found the organization now known as African Strategies for Advancing Pathology, which strives to improve and increase access to diagnostic pathology and laboratory medicine in sub-Saharan Africa.

I thoroughly enjoyed my work with the International Academy of Pathology (IAP) organizing international meetings and planning the development of educational systems in disadvantaged areas. At the 100th anniversary of the IAP in 2006, one of the Nigerian pathologists I worked with decided to label me “the mother of African pathologists.” That’s one of the most rewarding parts of my career, because I feel as though I have made a difference to people’s lives. In fact, my old colleagues still write to me and say, “Mama, how are you doing?!”

What do you find most challenging about your work?

One of the biggest challenges is motivating others to participate in global health, because it’s often difficult to convince them that it’s something we should be concerned about when we have our own problems. It’s felt like talking to a wall at times, but I think the AIDS epidemic massively changed people’s perspectives. A lack of resources is also frustrating, especially when a country can’t afford to order the supplies needed to take care of its patients. That’s not a problem that I can fix directly; it’s a case of convincing people to fund what’s important, not just what’s high-profile.

What advice would you give to others who want to make an impact?

You have to climb the ladder. Don’t think you’re going to make an impact on day one; instead you have to build a network by having a skill set and being humble and willing to learn. It’s also important to have confidence in yourself and to speak up, especially when you think everybody already knows what you’re going to say. Sometimes they don’t; sometimes, your ideas are novel and you engage with people who can offer new opportunities. As time goes on, you will start defining where you will make a difference – but be prepared for this to change over time.

I’m extremely proud of my career. I’ve lectured – mostly on HIV – in around 25 countries across every continent other than Antarctica; more recently, I have delivered talks on mentoring and pathology capacity work. Since retiring in 2015, I have placed a much heavier emphasis on mentoring. I currently work on the ASCP’s education subcommittee for global pathology, helping people in Africa go to conferences, develop new projects, and with general practice.

I was awarded the IAP’s gold medal in 2012 for lecturing around the world, and I tell people that I’m the first person who received it simply for being nice! I firmly believe that great leaders don’t make themselves better; they make the people around them better by giving them the tools they need to make a difference. That’s what I want to achieve now. I’m not going to be around to practice in 10 years and I need to know that there are enough global health workers for the future. My continued goal is to help pathology grow in Africa and to nurture a new cohort of young people in the US who are dedicated to this ambition. I will keep doing this as long as I’m healthy and needed!

Outside the Lab Profession, Microbiology and immunology, Training and education 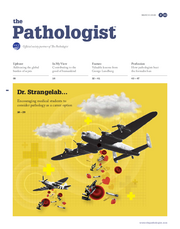