The Laboratory: Critical to Sports

Elite athletes from all over the globe will travel to Tokyo to compete in the 2020 Summer Olympics. Try to imagine more than 10,000 athletes, all of whom have been training most of their lives for that very moment. They’ve spent hours practicing and perfecting their skills. They’ve sacrificed time with family and friends to pursue their goals. They’ve dedicated their bodies and minds to their talent. And now, they’re almost there – at the apex of sporting events. Those weeks in July and August represent the culmination of their sport, and each participant is eager to take home the gold – to be deemed the world’s best.

But they couldn’t have gotten there without the medical laboratory.

Just as it is a cornerstone of healthcare, the laboratory is a cornerstone of fair athletic competition. In the late 1960s, when drug-testing Olympic athletes became standard, the International Olympic Committee mandated that host cities have medical laboratories that could accurately analyze and detect any trace of performance-enhancing drugs. Now, the World Anti-Doping Agency (WADA) leads the charge in ensuring that athletes are not using such drugs to improve their performance. Through these years, the laboratory has provided necessary and accurate testing.

As new drugs come onto the scene, the laboratory continually upgrades its technology and practices so that no athlete will have an unfair advantage over others.

Since the early 2000s, the prevalence of doping scandals at the Olympics has risen, and we’ve seen multiple athletes caught up in them. As recently as this past December, WADA banned Russia from participating in the Olympic Games altogether for the next four years because of accusations that their athletes are using illegal performance drugs. Scandals like these take a toll on the public’s trust – trust that the athletes they cheer on are upstanding in their sport. Trust that all those involved have the integrity of the sport foremost in their minds. Trust that the international sporting community is keeping a sharp eye on regulations around performance-enhancing substances and on the athletes or coaches or trainers who may attempt to bend or break the rules.

But what the public has always trusted – and should always trust – is the fact that the medical laboratory is there to support these athletes and keep the integrity of the sport intact. As new drugs come onto the scene, the laboratory continually upgrades its technology and practices so that no athlete will have an unfair advantage over others. The laboratory is the first line of defense in creating an even playing field.

So, this summer, when you tune in to watch your preferred Olympic sport, know that, as pathologists and laboratory scientists, your profession played an important part in these Olympic games. Your profession will have a hand in these athletes’ successes. It is our community that safeguards these Olympic Games and other international sporting events from the unfair edge stemming from banned substances, providing the foundation for good sportsmanship worldwide.

CEO of the American Society for Clinical Pathology

Outside the Lab Regulation and standards 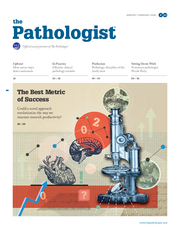