Outside the Lab Profession, Clinical care

The Difference Between Life and Death

Pathologists’ stake in the humanitarian crisis at the US-Mexico border

On any given day, tens of thousands of immigrants and refugees are held in detention by immigration enforcement along the US-Mexico border (1). The deluge of detentions, often occurring in overflowing and inadequate facilities, has created a health crisis that has deepened the plight of this vulnerable population. For many detainees, the grating conditions of their migration and the harsh realities of their detention create the need for medical expertise in fields like clinical microbiology, transfusion medicine, and the diagnosis of surgical pathology specimens. Pathology is an essential component of this patient population’s unique needs, and pathologists should be an important part of the medical voices advocating for the care of detainees’ health.

The US-Mexico border is known to be home to a collection of unique health conditions and diverse pathologies.

As a medical student in El Paso, Texas, I have seen numerous individuals on the inpatient wards who have been admitted from detention centers and who are under supervision by immigration enforcement. The US-Mexico border is known to be home to a collection of unique health conditions and diverse pathologies. Additionally, the influx of migrants from locations throughout Latin America only increases the need for diagnoses both from the lab and under the lens of a microscope. One patient I encountered was found to be infected with Salmonella typhimurium. Another received a first-time diagnosis of leukemia in the hospital. When migrant patients receive care at the border, pathologists provide important diagnoses for a broad variety of conditions.

There are many other challenges that pathologists are uniquely qualified to address. Undocumented immigrants are vastly more likely than the average American to be victims of sexual violence and rape at some point in their lives (2). There is a great need for screenings for sexually transmitted diseases, Pap smears, and other age-appropriate cancer screening tests among migrants. This is in addition to the need for consistent screening and laboratory testing for other infectious diseases, such as tuberculosis or blood-borne pathogens.

As physicians who see these challenges first-hand, pathologists should continue advocating and working for the safety of people who come over the border.

In December 2018, a seven-year-old girl from Guatemala died while being detained at the US border. An autopsy performed by the Office of the Medical Examiner in El Paso determined that she died of sepsis and multiple organ dysfunction due to a disseminated streptococcal infection. Although she showed signs of a severe bacterial infection from the moment she and her father were apprehended, she was not hospitalized until 12 hours later. The lack of experienced medical personnel and training likely cost the child her life. The former head of the American Academy of Pediatrics called the incident “a death that could have been preventable” (3). A pathologist diagnosed her condition post-mortem but, given the chance, it’s likely that another could have contributed to her diagnosis so that she could have received life-saving treatment in the hospital. As physicians who see these challenges first-hand, pathologists should continue advocating and working for the safety of people who come over the border. Their influence could mean the difference between life and death.

Despite the fact that pathologists’ work to screen, diagnose, and treat patients within the often-marginalized population in immigration enforcement custody takes place behind the scenes, they nevertheless play a decisive role in the wellbeing and even survival of thousands. As a prospective pathologist, I see these people as my future patients, and I hope to continue the essential work done by pathologists to assist some of the most vulnerable among us.

Outside the Lab Profession, Clinical care 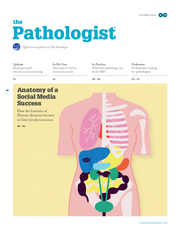