An Indian Perspective on Pathology

You have authored eight editions of the Textbook of Pathology. How did this book come about?

In India, until late 1980s, the only teaching tools I had were a blackboard and chalk. The words spoken by the teacher were considered sacrosanct and the students would take down notes based on each lecture. The caveat was that students had to consider the teachers “good” – and I met their criteria. In fact, I eventually found out that each upcoming batch of students would photocopy notes of the topics I had taught in previous years and use them to study ahead.

No doubt there were internationally renowned pathology textbooks then, too, but students wanted the material in a format that was easy to understand and reproduce in their exams. I realized that I needed to address this gap systematically; after all, between a fallible teacher lecturing and fallible students taking notes, there were guaranteed to be some transcription errors in the photocopied material that was passed from hand to hand! And that is how my long and rewarding journey toward textbook authorship began. The first edition of my Textbook of Pathology was released in 1992. In subsequent years, there have been more pathology books along similar lines written especially for dental, physiotherapy, and paramedical courses. These books have certainly brought me closer to their users all around the world!

Tell us about medical education in India…

India has 536 medical colleges – more than any other country in the world – and admits approximately 80,000 students annually to its graduate program in medicine (the “MBBS”). Many colleges also offer postgraduate courses in various specialties. Indian medical colleges are equally divided between the public and private sectors, but all are under the regulatory control of the Medical Council of India, which supervises them for uniformity of educational standards and for recognition of medical degree qualifications.

Many Indian doctors pursue professional careers in other countries. It is difficult to say exactly how many doctors from India are currently settled elsewhere, but I would estimate that about one in 10 Indian doctors migrates to foreign shores every year. In the USA alone, there are about 40,000 Indian doctors – approximately 20 percent of all international doctors and 5 percent of all doctors in the country!

What is pathology education and training like in India?

There are approximately 4,500 current members of the Indian Association of Pathologists and Microbiologists – but the actual number of pathologists is much higher. About 1,500 students per year are admitted to the three-year pathology course. In the past, pathology seats were in high demand and went to applicants with a high PG-NEET rank. Lately, the job market for pathology has shrunk, so the discipline has become less popular. Ultimately, for some applicants, pathology is their chosen life’s work; for others, it is a compromise between what they want and what their PG-NEET rank allows. I have noticed one positive demographic shift; increasing numbers of women are entering pathology, to the extent that – in the not-too-distant future – it may be rare to find a male pathologist in India!

Increasing numbers of women are entering pathology, to the extent that – in the not-too-distant future – it may be rare to find a male pathologist in India!

As far as teaching and training in pathology is concerned, there is wide variation between institutions across India. However, training includes rotations through various subspecialties, such as histopathology, cytology, hematology, clinical pathology, and transfusion medicine. At the end of the program, we expect certain standards of knowledge and skill from all candidates. Many have become pathology “household names” – for instance, Vinay Kumar, famous for his work on Robbins Pathologic Basis of Disease – and some have even started their own organizations, such as the 25-year-old Association of Indian Pathologists in North America.

Where in pathology training in India is there scope for improvement?

I think we need an oversight committee of experts from around the country to establish uniformity in training activities and ensure that all institutions follow a structured academic program. Another problem is that many institutions lack teaching resources. Some don’t have the full spectrum of biopsy materials for training; others lack access to modern aids, such as detailed immunohistochemistry panels, molecular pathology, or electron microscopy. This latter issue may be trickier to resolve, but I believe that more privileged institutions should arrange periodic training programs specifically directed at postgraduates in pathology, providing them access to the resources their own institutions may lack.

How do you envision the future of pathology in India?

I think the Internet has led to globalization of knowledge sharing. The current crop of Indian pathology students have access to vast amounts of learning material. Most students are fully aware that it is more important to learn their subject well than to simply pass an exam – and, for them, books are only one of many sources of learning. With respect to the practice of pathology, there is a greater emphasis on quality control and on reporting in the international dataset format. Indian pathologists are striving for greater uniformity and standardization, and I foresee a bright future for us all.

5. Outside the Lab Training and education

August Issue of The Pathologist 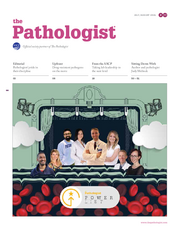